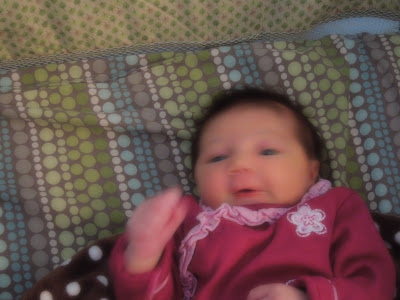 Not too much different to share for the second week of life. My mother left yesterday, so we are officially doing everything on our own. Well, almost everything. We have had some friends bring over meals this week and that has been a huge help. I have really felt loved and it just makes me want to do more for others because they have been so thoughtful to us. It is also official that Ella is our second child, because I have already noticed that I have taken far less pictures than I did with Jack. I don't think I pulled out the camera once this last week, oops! I guess I have been too busy whipping out my breasts, because we are seriously working on breastfeeding. I think I might be able to do it without supplementing. I have learned a lot in the last two weeks to increase my milk supply. It would certainly make life easier and cheaper if I don't have to have formula. Okay, on with the details!

*All pictures added are from Joe's phone since I didn't take any pictures myself.

Nicknames: Cloven Hoof Princess (Joe's nickname for her since she has a turned foot), Little Turtle, and Hazelnut 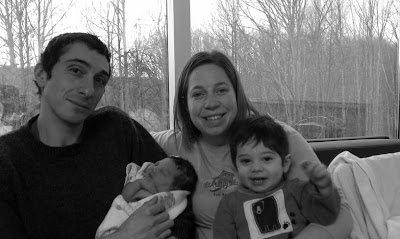 Weight and Length: We have had some concerns about Ella's weight. Earlier this week we went into the doctor's office to do a check up on her weight and found that she had only increased by 1 ounce to 6lb. 13 oz., which is not enough. So we set an appointment for Friday and found that she lost 2 ounces. Maybe I'm just not giving her enough breast milk. She also was not pooping that much either. So I have been discouraged and started supplementing again at each feeding. I tried to pump after a feeding to use that for the supplement, but the hand pumps really suck and I don't get much from them. So I should know if her weight increases next week, because we have another appointment on Tuesday. However, I don't think I will continue supplementing like this after a month's time. If my milk supply doesn't increase, then I may just go straight to bottles...I just don't know. As far as her length, she keeps growing and is not 21.5 inches. 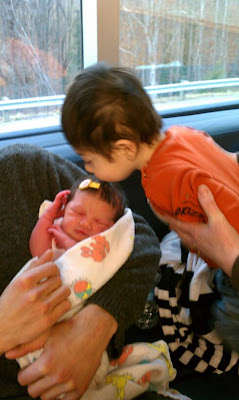 Temperament: Ella is more aware everyday. I have been trying to remember to put her on the floor play mat for tummy time and she does so good. I could never do that with Jack, because he would cry after about 10 seconds. He didn't like to be on his stomach until he was able to roll onto it. Ella would probably sleep on her stomach, actually I think she is more of a side sleeper (I let her do that for naps when I am around). I have to sit next to her when I put her on the floor though, because Jack would be all over her otherwise. He has not concept of gentle. And even though she cries when he grabs, hits, kisses, or bumps her she doesn't seem to get too upset. I have a feeling to is going to do well as the second child. Oh, and I have learned that she really does not like to take baths. Her cry gets very loud and extreme. I almost feel bad trying to keep her clean. 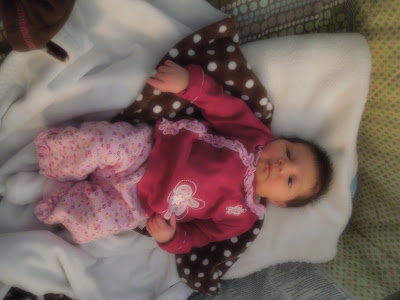 Items/Toys That We Love The Most: I still love swaddling her. It seems to be one of the most comforting things for her at this point.

First/New Experiences: Nothing to new yet. My mom left this week, so I guess we officially had our first days without support. Oh, I did take her to music class with Jack, but she slept through the whole thing...I guess it was a sweet sound! 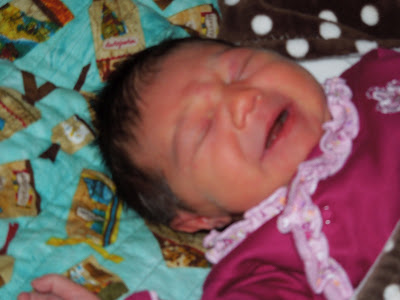 She's so beautiful Tracy! Congratulations and good luck with two :)

Thanks Shayna. It has been fun to be a mom...but definitely has it's challenges with two children. I can only imagine what it must be like when you have three kids and only two arms!