Ella turned 2 years old this past weekend.  We have yet to really celebrate it with her. My parents were planning to come down the weekend after so I had hoped to do a dinner and cake with them.  However, it has been snowing a lot and we decided it was best they stay home and we are going to try again next weekend.  So if all goes well with the weather then, she will get a kitty cat cake and have a few presents from us and my parents.  Some gifts have been coming in for the past week though, so she has really enjoyed that!  And since the kids are napping, I thought I might try and do a quick update about what she is like at this moment.  Here are some things I want to remember about Ella as a 2 year old:

I have definitely put blogging on the back burner recently. It just became much harder to do once I started working full time. I thought I would write up a few funny stories about Jack and Ella, so that I don't forget them. I am also including some of my favorites from this summer. We have been playing a lot, and it has been much easier to get out and do things with them at this age. 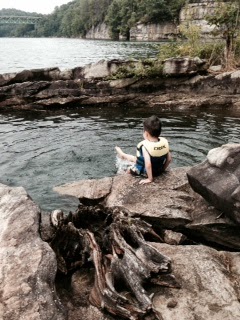 He is so excited to go to preschool this upcoming year. Technically he doesn't qualify for preschool because his birthday is after the September 1st cut-off date, but we are enrolling him in the Catholic School's program, since they allow three year old children. Most of his friends at the daycare will be moving on and really in so many ways he seems ready for more of a learning environment. I am happy though, that he will get two years of preschool and be a "older" student when he actually begins kindergarten. Hopefully that means he will be more mature. The only challenge with Jack right now is potty training. He is pretty much trained during the day. Occasionally there are accidents, but he stays dry. However, we have not been able to kick the pull-ups at night. We have tried several times to go with underwear at night, but he always has an accident. Hopefully we can kick that bad habit soon.
Jack loves to ride his bike. He started riding a pedal bike back in April and has quickly progressed every time that he gets out on his bike. At first he didn't like riding his new bike, but now he is excited about it wants to go far with his daddy. He even asked to pick out stickers to decorate his bike. 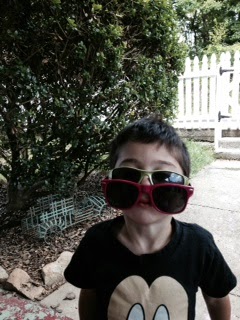 Jack loves all things ninja right now and will sit down with us to watch American Ninja Warrior each week. He pretends to make his own obstacle courses at the playground or in our house.
He really enjoys going to his new primary class at church. Each week he shows me what he has made and asks me for help with any assignments that he might have to complete. He has even invited our neighbor (Marcella) to go to church with us. A few weeks ago we had the missionaries over for dinner and he loved spending some time with them.
Jack learned how to swim the doggie paddle this summer as well. He has to have his life jacket on, but he was so excited when he finally figured out how to do it that he was telling everyone about it for days.
As he continues to grow I really see a very sweet little boy. He is sensitive to others and their feelings. He wants to please his parents and still loves to snuggle his mom and dad. 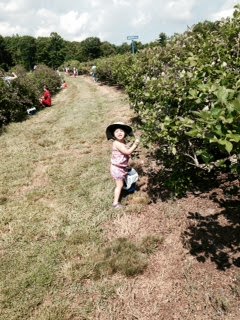 Ella is truly our feisty child. I think her nickname should be firecracker. She is always so full of energy and seems so tough. Usually she likes to wrestle with her brother and her curiosity keeps her interested in pretty much everything. Just in the last two months, we have had to take her to the emergency room three times! Once for swallowing my mothers melatonin, once when I picked her up and separated a young bone in her wrist, and once for having low oxygen. That trip required an ambulance from the doctor's office to the ER and has costs us a lot of money! Fortunately she has been just fine after each visit.
As tough as Ella is, she also is very motherly. She likes to play with her baby dolls. She will spend a long time trying to feed them, put them to sleep, and change their diapers. Plus, she loves animals and will try to pet or pick up dogs, cats, rabbits, ducks, chickens, frogs, bugs, really any animal. 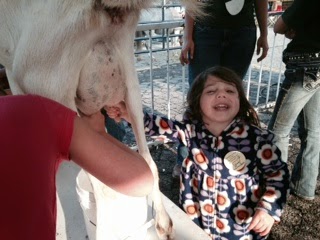 Ella is learning to ride a bike too. After Jack got a pedal bike, she started riding the strider bike. It didn't take very long before she was trying to go down steep hills. Actually, she still tries to do that but her technical skills are not there yet. Last week she actually ran into a fence while riding around the playground. It gave her a bloody nose. There was a bit of crying, but eventually she got back on her bike.
She tells us that her favorite colors are pink and purple. 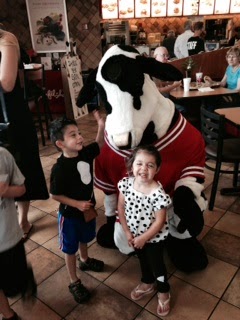 Ella gives the best hugs in the world. Each night when I put the kids to bed, she will give me a kiss and a hug. I hope that continues for a long time.
One of my favorite days this summer was on 7/11. It was cow appreciation day at chick-fila so I decided to take advantage of some free meals. I packed the kids up and we went berry picking at a local farm then we drove over to Chick-fila for lunch. In order to get a free meal, a person needed to dress up. So we all wore black and then I taped on white spots. The kids were so excited to see the person dressed up like a cow. And the love playing at the playground too. On the drive home Jack said, "that was really fun." Honestly, I love when I know that we did something that made my kids happy.

Two nigths ago Joe and I put the kids to bed. We were hoping for a little time to relax because we are working this week for a summer training. Well, I went downstairs and next thing I know, I started to hear noises in their room. I climbed back up the stairs and approached their bedroom door. The lights were on (they moved one of their chairs over there to turn the lights on) and both of them had changed their clothes and put on their kitchen aprons! They turned around a looked at me, with the biggest smiles and said, "we are having a party." I couldn't help but laugh and then I reminded them it was bed time and they would need to go back to bed. Two more times back into the room and I had to lock the door, hoping that was scare them. It didn't, because they just turned the light back on and continued to have a party. At 10pm I realized that could go on this way for hours (in my head I was thinking, why don't they play this nicely all the time?). So I went back in and had to spank them before putting them back to bed. I really wish I would have taken a picture, because they literally pulled everything out of their play kitchen and put it on the small table in their room. It was cute. And annoying. 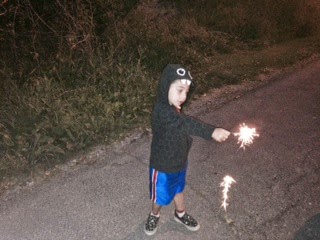 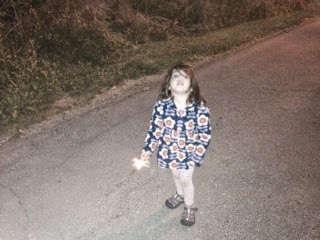 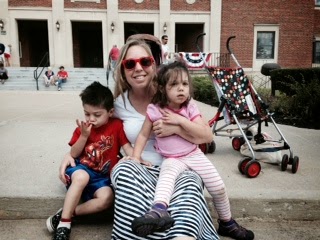 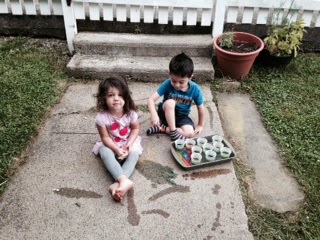 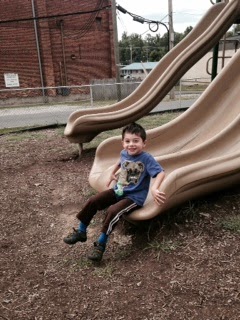