I took a bit of a sabbatical from the blog.  I guess my crafting projects have gotten the better of me.  I would like to make a challenge for myself to blog at least once a day.  It would be a good habit to start and a great way to remember some of the silly conversations I have with Jack and Ella.  Maybe I can make that my goal for April....  In the meantime, here is a little update with my struggles and triumphs as a mother. 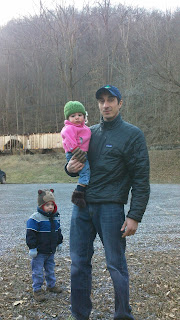 1.  I used to think I was a patient person, but I feel like I am yelling at Jack a lot lately.  I think I take frustrations out on him or maybe I am just frustrated that he cannot play nicely with his sister.  It seems like we do a lot of time outs lately (especially when we are cooped up in the house for these winter days) and I admit to spanking him.  I hate that I do it, and it definitely comes out of anger or frustration.  I find it hard to keep my cool when he is doing something really bad, like biting his sister.  It really makes me feel like an awful mother.  My goal this week has been to take a deep breath before disciplining him.  Just a second to think about the best action will help me tremendously.  I really just want to be a good mother and I want him to listen and grow up to be a respectful young man and I can't do that by leading with anger.

2.  Jack and Ella share a bedroom and it has meant a lot of adjusting with the sleeping routines.  Fortunately, Ella is a great sleeper.  She still has some nights when she wakes up looking for comfort, but mostly she sleeps from 8pm until 6am.  However, Jack has always woken up at night and recently we started putting him in his bed for the entire night.  After doing that, he was waking up for 4 to 5 times a night.  We would have to go into his room, lay him back down in bed, and then lay on the floor next to his bed until he fell back asleep.  Usually, but not always, this responsibility was my job.  I was just tired of it.  So we decided it was enough and began locking the door shut with a bungee cord.  Surprisingly he has done really well.  After doing good for a week, Ella decided she needed to wake up.  This then caused Jack to wake up and we had a whole night time debacle to deal with.  Both crying while I shut the door is the worst feeling.  However, they both went to bed again.  I would like to think our sleepless nights would be coming to an end, but I don't feel so positive anymore.  Seriously if they wake up and cry despite us shutting the door and using tough love, what else is there to do? 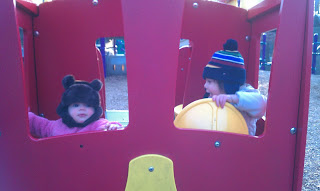 3.  Being a parent is a messy job.  On the last two car trips that we have taken, Jack has thrown up.  It gets all over his clothes and car seat.  And it smells.  You just learn to deal with it.  However, I never thought that dealing with poop, vomit, snot, drool, and food messes would be a daily part of my life. I guess you don't think about that part as much when you are planning to be a parent.  And can someone please give me a suggestion on how to stop Ella from putting her dirty hands in her hair when we are sitting down for a meal?

Parenting Ups:
1.  As hard as it has been to put Jack in his bed and shut the door each night, it has been especially nice to hear him say, "lobe you mommy!" when I am shutting the door.  It is a special thing to hear your child tell you they love you, especially when you feel like you can do so much better. 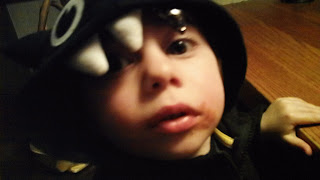 2.  We bought a tunnel for Jack and Ella to play with and everyday they have the best time crawling in and out of it.  I just love to watch them play together and laugh together.  It really brings such great joy to watch them enjoying each other. 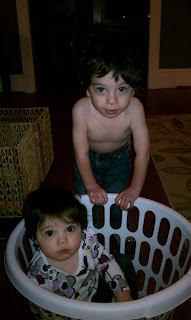 3.  Jack clearly loves his sister.  If he is awake when she wakes from a nap, he wants to be the first to walk into the room and get her.  When we are going somewhere he always make sure that she gets to go too.  And despite the fact that he can be really aggressive and mean, he has the most wonderful moments of sharing with her.  It is especially cute watching him try to feed her. 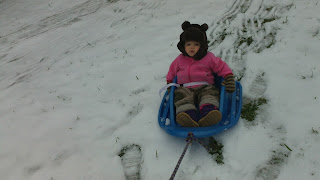 4.  Ella adores her older brother.  Sometimes I wonder why, when he takes toys away from her or pushes her away, but I think I understand why.  He is her constant companion.  They get to do everything together.  We go almost everywhere together and she likes his company and finds him to be funny.

5.  I try to make it to the gym a few times a week and I love that the kids both run to me when I go to the play area to get them.  I don't know what it feels like to be at work and then return home, but I imagine it would be similar.

The parenting ups might be short and brief, but really it is the little things that make parenting so special.  I love my kids and I want to be better for them. 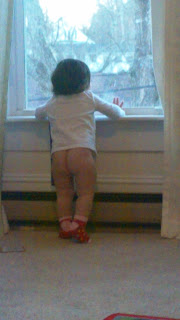 Oh, and just as an update...Ella is trying to say the word dog.  Her favorite books are the Brown Bear, Brown Bear what do you see? books. Jack really likes to read a book about a puppy called MuddyPaws.  He is learning his colors right now and seems to adore Spiderman.  His vocabulary is really improving.  He can say lots of words and repeat almost everything we say, however he needs to work on his pronunciation.
- March 07, 2013