There isn't too much to post about the first week home with Jack. Of course he was already five days old when we were finally able to bring him home with us. So I had two days to experience life with a newborn in the house. Since my mom is also here with us we had to figure out the best sleeping situation as well. The guest bedroom is also the baby room. I think in the future Joe and I will probably just sleep in the guest bed, or put Jack to sleep in our room in the pack-n-play. So this week that is what we did, Jack slept in our room in the pack-n-play. However, he really didn't do much sleeping. I don't know if that is normal, but he really didn't like to be laying down in the crib or pack-n-play. The best spot was in some one's arms. So we dealt with a bet of his fussiness and lots of holding to get him to sleep. Oh, not to mention I had to change his outfit four times that first night, because each time I put his diaper on I forgot to point his penis downwards. So he would pee right out the top of the diaper onto his clothes and drip down the side of his back! I'm such a good mommy, right? Luckily I figured that out pretty quickly though, and that has not been to much of a problem since. Now we are just trying to keep the peeing from happening during diaper changes! 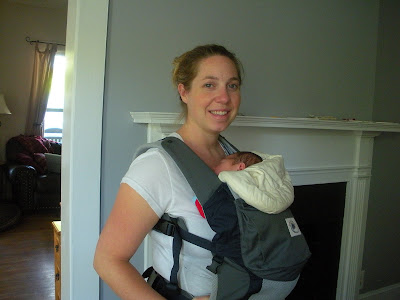 For the most part, he is like a normal newborn...lots of sleeping, eating, and pooping. He tends to fight off sleep though, especially from the hours of 8pm to 1pm. That makes for a tired mommy. Oh, and he really does not like breast feeding. I think this is because he started on a bottle while in the nursery. Unfortunately I do not provide the quick supply that a bottle does and he has to work a little harder for my milk. Therefore, any time I try to put him on the breast it results in a lot of crying and a very sad mom, who really wants to give the best to her son. I have also had a chance to try out his baby carrier and found that he loves it and it basically puts him to sleep and allows me to do the things I want to do, like write this post. The Ergo was worth every penny I spent on it!

I continue to get better with each passing day as well. The swelling has completely gone away in my legs and ankles...yeah! Each day it seems as though I am smaller in the stomach area too. And every day I take Jack for a walk in his stroller and I can go further and further (with less pain). As we are now halfway through the second week of his life, I hope he will continue to learn to sleep on his back in the pack-n-play so I can get more sleep. I don't mind getting up at night, it is just not going to bed that I hate. We have even had to co-sleep a little bit. I know it is probably okay, because all over the world they do it, but of course there is the other half of me that worries. So the more I can get him into his own bed the happier I become! This week I hope to write down a little about the birth experience and also take some newborn photos! He also has his first doctors appointment tomorrow! 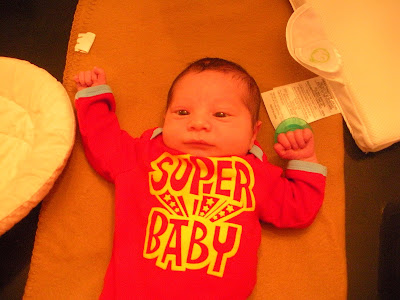 Jack is so cute! That's great that you have an Ergo. I didn't learn about those until both my girls were too big. Good luck with the breast feeding. Don't give up. He'll get the hang of it eventually. We're thinking of you and your family often. Love, Karen

You are doing great! Can't wait to meet him & would love to take some baby pics! We did the co-sleeping with both Rita & Zoe-they were both in big girl beds at 2. I loved it. Good luck with the breastfeeding-He'll get the hang of it! Call la leche if you get frustrated.

Hope all is well! Miss you!