Okay, so his birthday was in September.  I know I'm super behind at all this...but really so are most bloggers! I'm still documenting my life though...so here are some pictures from the day of the party. I know that I have more pictures on my husband's phone...but I will probably never get to those and that is why it was taking me forever to post.  It was a great turnout and Jack still remembers his firetruck birthday cake and tells me that he wants the same thing for his next birthday too. 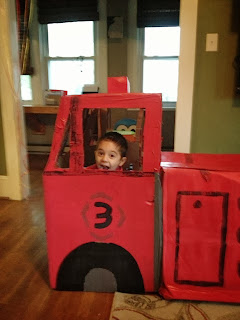 We spent about three weekends working on the cardboard firetruck.  After renovating the kitchen I knew we would have some cardboard lying around, so we decided to use it.  It took lots of spray paint and only lasted long enough for the party, but it was a huge hit with the kids! We were going to have a firetruck relay race in the yard, but it rained so that part got shut down.  However, it made the chili all that more tasty, because it was fitting for the weather.  I also cut up apples, red/yellow/orange peppers, strawberries, and watermelon.  It was actually pretty low key. 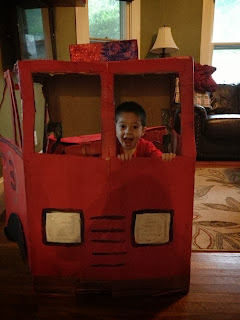 Probably my favorite part was the gift bags.  We were able to get some items from the local fire department (crayons, coloring books, a fire safety book, and key chains in a cloth bag.  I also purchased a few plastic fire hats to share as well.  As you can see from Jack's smiles, it was all a real big hit.  Oh, and I think he loved that he had presents.  I meant to tell people they didn't need to bring anything, but forgot and he got a few gifts.  Of course, he was basically in love with them all! 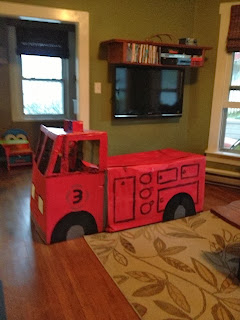 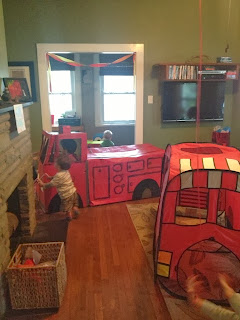 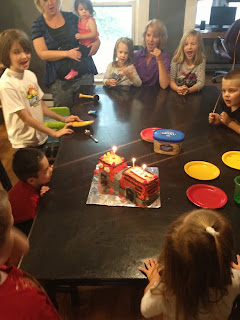