*Many of the pictures I wanted to use are on another computer and I don't want to waste too much time getting this up! 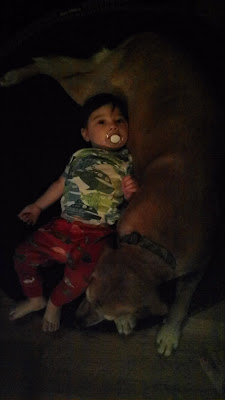 Well, Jack's birthday was last Friday, so this is being updated a little late, but I really wanted to include some pictures of the birthday party. Plus we are transitioning from one computer to a new one, so I am trying to get all the pictures that we took in the last month (it feels like we didn't do so well this month, oops!). This last month was a busy one in our house. After getting home from our trip to Northern Virginia, Joe started back to work in a new school, we renovated two more rooms in our house, and Jack started to walk. I can't wait to show pictures of our finished rooms, but that will have to come at another time, since I am still waiting to put up window treatments, plus this is a post about Jack! This will be the last monthly post about Jack but I hope to be more proactive about writing on my blog in the future, with some shorter posts. 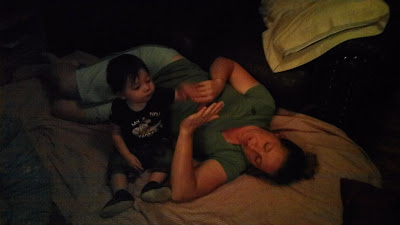 Temparament: He continues to be a happy baby and smiles at everyone. I should count my blessings that he never went through a separation anxiety and would always allow others to hold him. Usually he is shy for the first few minutes though, but when he feels comfortable he smiles, walks, crawls, or plays with anyone. His sleep patterns are still super inconsistent. I don't know if it is caused by teething issues or if I have just raised a child that does not know how to fall asleep on his own in the middle of the night. Here is what happens...We have a bed time routinue (bath, teeth brushed, story, then in bed with music and a little head rub). It takes about ten minutes, but he goes to be every night without problems. The hard part is that he wakes up in the middle of the night and cries and does not want to be in his crib alone. If I give in and let him go in our bed though, he doesn't sleep well either. In fact, he tosses and turns, wimpers and cries with unsteady sleep in between. How do I fix that? Any ideas? I guess we are lucky that he still takes two naps during the day and they are good naps, which allows me to shower and clean a little.

He is also growing in personality. Last night he started laughing really hard when either I or Joe sneezed. I guess it was funny. So when he sneezed I decided to giggle with him. Jack has also been able to have a lot more play dates with kids through church and in the community. Sometimes he is super observant and other times he tries to play with the other kids, but usually he just pulls out pacifiers to put in his own mouth or he hits them! That can be pretty discouraging! I'm sure he will have lots of time to work on sharing when his little sister arrives. 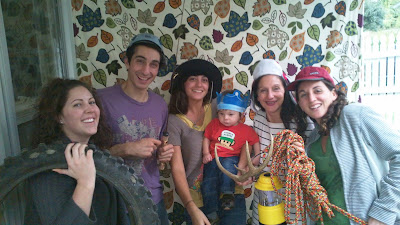 Solids: Jack continues to branch out with the foods that he is trying. I can almost always give him items from our dinner. He eats a variety of foods, but has showed some pickiness by spitting out items he doesn't like. He also points to foods or drinks that he wants. Maybe we are one step closer to talking? He will go to the doctor next week, so I don't know if he is getting any bigger, but he is developing just fine so I have decided not to worry anymore. I guess that just means we will get away with wearing nine month clothes for longer! 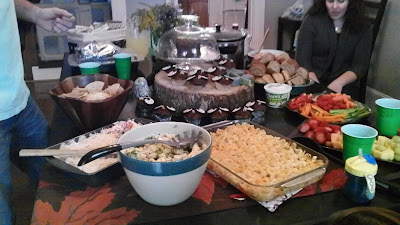 Items/Toys That We Love The Most: Jack is playing with all his toys and he received quite a few new ones for his birthday (just what we didn't need in our crowded house). Even if it makes things crowded, he is happy and that makes us happy. Forntunately some of those gifts are almost better as outside toys so that helps. Although, I find that we don't really need toys for him to be happy. All Jack needs is a handful of cherrios, a dog to climb over, and a playground to go to each day. He loves being at the playground, especially since he can walk. I am learning he has an eagerness to explore and climb/walk all through out the playground. We try to go as often as possible each week.

First Experiences: On August 23rd Jack took his first steps alone. We happened to be in Charleston at the Home Goods store and I was worried that he would not want to sit in the car seat for another hour to go home. So before we left I tried to have him walk around or move a little bit. I put him down and he stood in place, so I thought, let me get in front of him and see if he would walk towards me and he did it. It was only two steps but I was thrilled and cheered him on so he did it again two more times at the store. I couldn't wait to go home and show his daddy. However it took a while from that point to his official days of walking. It took almost the rest of that month for him to feel confident enough to decide that walking was better than crawling. We are now at that point and it is cute to see him follow me around the house with such excitement. He is no longer our baby boy and is growing into our toddler child.

He is so dang cute! I can't wait to see what this new year will bring him with the new addition coming to the family!