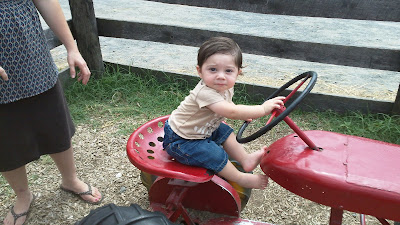 Only one month left of being an infant for little Jack. This year has really flown by and also been such a learning process for the both of us. Every day I think he looks more like a little boy and less like a baby. The funny thing is that I have always wanted children, but I guess I'm sad to think that he will grow up. I love him this little and I know I will keep loving him as he grows, but I just love having a little one around. I can truly understand when people say they miss when their kids were "that age." I'm already sad to see that he is changing. 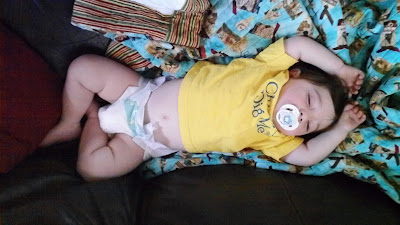 This past Monday, we took Jack out for an afternoon climbing trip. There have been many times when it doesn't seem all that successful and I end up heading home early with him. However, maybe it was the larger number of climbers (8 people, 3 of which were pregnant), but he was a very happy camper. He was crawling all over the rocks and giggling with everyone. I was happy to get some climbing in before my belly gets too big with baby number 2. We took a trip to visit family for a couple weeks, which completely messed up his sleeping schedule. Thus, we went through the whole process of falling asleep in the crib. He is doing OK at it, but still wakes up in the night. I am beginning to wonder, will that ever change? Although Jack can have his moments, I have found that he takes most things in stride. He loves to be around people and interact with them. He also loves to play with dogs or cats. We are lucky to have such a laid back child. Another thing he really likes to do right now is open and close doors or cabinets. Last month we put safety looks on the kitchen cabinets so that helped from having a big mess of pots and pans. However, he still loves it when he can find an open door to play with. Who knew they would be so much fun? Solids He Has Tried: Just the other day I had mentioned to Joe that Jack can pretty much eat anything we are eating. Usually at dinner time I will give him small pieces of our meal. So far that has meant, spaghetti, casserole dishes, tacos, beans and rice, etc. He still eats some baby food though and I give that to him during the day. I went to the WIC offices today to apply for some support and after they weighed him, he was only 19lbs. That seems a bit discouraging for me, because I feel like he has really increased his diet, but only gained 1/2 a pound in the last month. Maybe I just need to be trying to feed him more often? Items/Toys That We Love The Most: While we are at my parents house, my mom bought a baby walker and it quickly became his favorite toy. He loves to walk behind it and gets a big smile and he almost giggles. I always laugh too, but that's because he runs into everything and doesn't understand when it bangs into something and he can't move forward. I am learning though, that I don't need too many toys. He is just as happy to play with Bodhi (our dog) or crawl around when we are outside. When I take him to the park he likes to be in the baby swing. Oh, and when we are around other children I have noticed that Jack is not afraid to pull other kids pacifiers out of their mouths so he can try theirs! Um, sorry about the germ swap! Although he doesn't always listen to me, I have noticed that he definitely understands. If I explain things to him, more than half the time he will follow my directions. He is so cute! 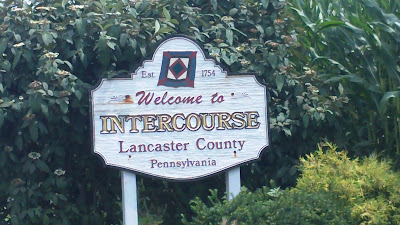 First Experiences: While visiting with our family, we were able to take many day trips. One of my favorites (which also happen to be too short) was to Intercourse, PA. Jack had no idea he was about to experience such a place as Intercourse, but he was happy none-the-less to be with all the family in my parents truck on the way up. 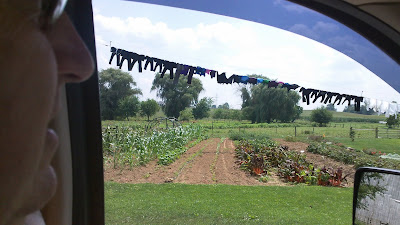 Basically we went to explore Amish country. We stopped in a few stores, then ate a huge and very delicious lunch, followed by some bike riding (although I was a slow and timid rider). Overall, I think Jack had a good time. 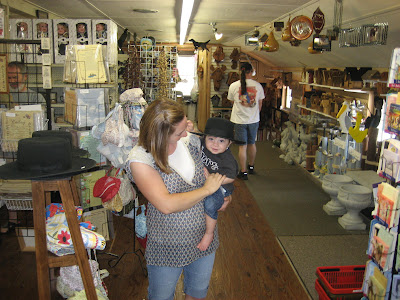 He also decided to take his first steps. Now, he is not walking yet, but that will come with time. I happened to be on a trip to Target in Charleston. Since it is an hour drive before we return home, I decided to let him walk around for a bit in the store. I put him on the floor and he just stood still. So I let go with my hands fully expecting him to squat into a sitting position, but he just continued to stand with this huge grin as if he was proud of himself. So I moved a few steps away from him and said, "Come here," and sure enough he took a few steps forwards into my arms. Since then he has done that a several times, but only at my encouraging. I'm not sure he really wants to walk yet, but he can do it when he is ready! 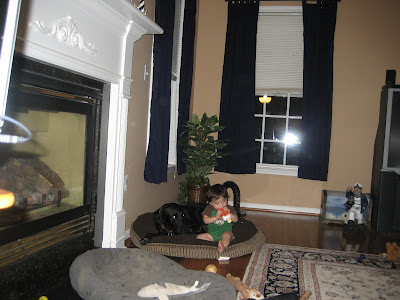 You can really see how pretty his eye color is in this picture! I think he has my eye color! 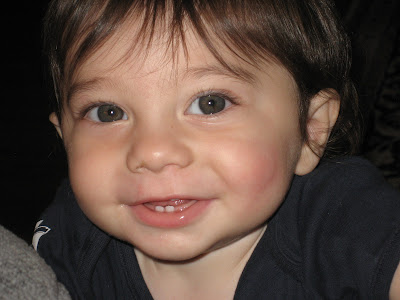 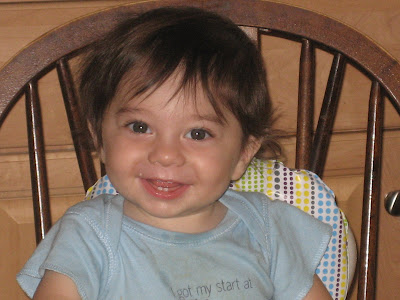 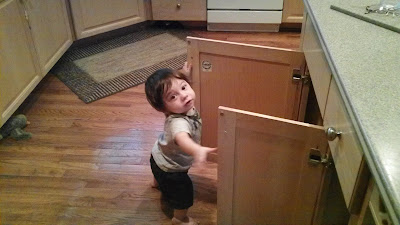