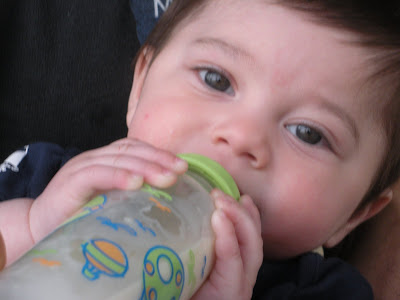 Another month has passed and it went quickly. That is probably because we were very busy at our house. We had guests at our house every weekend through the entire month of May. This past weekend I was busy helping with the New River Rendezvous, which is a big climber's festival in town. Jack was in tow the entire time and seemed to be enjoying himself. I appreciate that he takes all the craziness with ease. I often wonder if he will be grumpy from a lack of nap time or if his schedule is "off" but he continually shows off his happy personality.

Temperament: Often times people ask me if he ever cries and I think he is perfectly natured when we are out in public, because he is so curious that he has no time to be frustrated and cry. So yes, my baby does cry, but not a lot. He will cry if he is hurt and tired or if he doesn't feel well. As I suspected last month, the first tooth has emerged, and it is taking forever to sprout. I feel like Jack might have a high pain tolerance, because he doesn't seem to be too grumpy. However, he does have serious separation anxiety when he sees me walk away. Luckily he does well for his daddy though. We are still working on the bedtime routine. Right now he will fall asleep in his pack-n-play which is in our bedroom and around 1am he wakes up and wants to be close. I think we will be working on the bedtime routine in the summer when dad does not have to work. 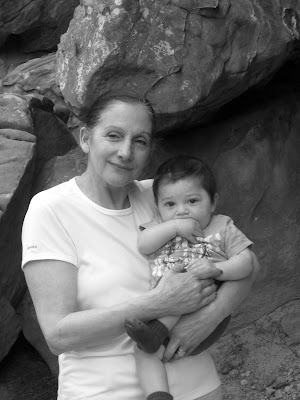 Solids He Has Eaten: This month has been tricky with solid food. Sometimes he just doesn't want to eat, or he just wants to feed himself, which means nothing is going into his mouth. I am trying to figure out how to increase the solids, it just seems he doesn't want them. He did get to try spinach, pears, yogurt, mashed potatoes, and rice puffs. He doesn't like yogurt very much, but I have tried it with applesauce and then it is a little more tolerable. He really loves the rice puffs, but still does not have the finger technique to get it into his mouth. It is still fun for him though. Yesterday I gave him small pieces of a banana, which he loved so today I will probably try cooking a mango to make it soft and give it to him in little pieces.

Items/Toys That We Love The Most: I love putting Jack in the jumper, since it frees my hands up to sweep the floors, make dinner, or wash dishes. Jack has learned how to army crawl, so there is no leaving him alone. Yesterday he crawled from the living room, through the hallway into the dining room and he was working his way into the kitchen. Crawling is his favorite thing right now, and with that he has discovered cords, dvds, the bookshelf, the fireplace, the floor heater, and he loves to crawl over to our dog. I am constantly working to baby proof. Oh, which means I love all the baby gates that my parents brought with them a few weeks ago! Jack loves to play with all his round toys that will roll away and he has to go after them. 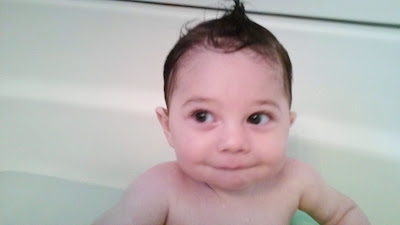 First Experiences: As I mentioned above, he has learned how to scoot across the floor. Each day it seems to get a little better too. He also gets up on his arms and knees to rock back and forth all the time. It is like he is learning new things every day. He still doesn't quite sit up by himself yet, but I figure he will learn that soon and once he does he will just be pulling himself all the way up! Jack has tried his first sippy cup, but still does not like it much! And he tried the rice puffs, which I feel is a big change to his eating patterns. We took a walk to the town park one evening and he loved it when I put him in the baby swing. He was swinging his arms and giggling, which is a clear sign of excitement over here. I will have to do it again! 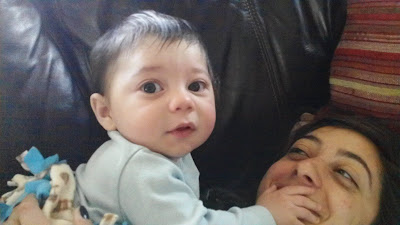 We love having Jack in our lives. Everyday he makes me laugh and we giggle together. I love when he crawls over to his momma, because he is tired and wants to be snuggled. It is nice to know that I'm on his favorite list. I know that one day that will change. And I am already putting plans together for his first birthday party. I can't wait!
- May 24, 2011