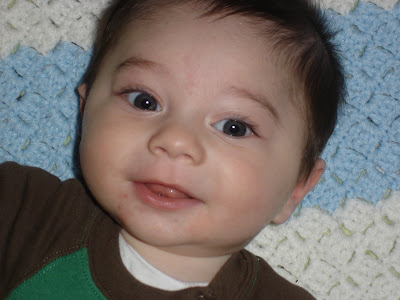 We are back with another monthly installment about our cutie patootie! I think I'm going to nickname his cute legs as "Thunder Thighs." He has the perfect amount of chubbiness so it is only natural they should be known as T-squared! He has grown in leaps and bounds this month and I am happy to report them on this ol' blog of mine, which has become far less about travel and much more about family life. Oh well. 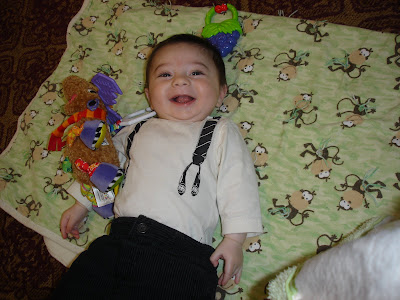 Nicknames: Peanut, Little Man, Nut Butt
Temperament: He continues to be an easy baby to care for. In fact, tonight he played in his jumper while we ate dinner, then while I played the piano, and even for five games of Boggle. I think that was over an hour, but he just loves it. As you may have noticed from some of the previous videos he has the cutest laugh and it makes our day when we find the magic formula that gets him going. He now knows how to sleep without a swaddle, however we are slowly weaning him off nap time in momma's arms. I'm sure it is my fault, because I like it too much. He does just find at bedtime though, so we must be doing something right, I just need to work on that this month. People always comment that he is a cutie, and of course I think he puts the charm on, because he is always smiling when we are out in public.

Weight: We actually went into the doctor's office today for a diaper rash that just didn't want to go away (I figured it was a yeast infection and I think I was right). Anyhow, I found out he is 16 pounds. 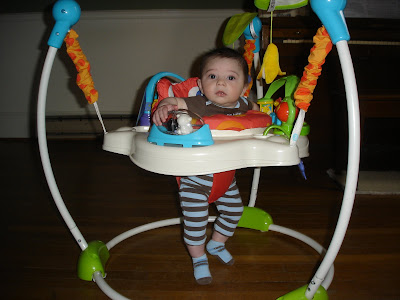 Items/Toys That We Love The Most: Now that I figured out how to use the stroller...I didn't know I could make the front wheel swivel...I am in love with using it. Sometimes I just strap a sleepy baby into the stroller and bring it out in the yard to work on the weeds. He naps and I work on the yard. It also came in handy when I was working at a Model UN conference with a couple students. Jack would nap in their and it became the station for storing diapers and bottles. The pack-n-play is also coming in handy lately too. Sometimes I will put Jack in there while I'm making dinner and he will roll around and at least I know he is not going to roll into anything. Of course Jack still loves the jumper and I have found he loves this simple musical toy that my grandparents bought him. Lately I have him play with it during diaper changes so he doesn't wiggle right off the changing table and I can attach the diaper to his body much easier. 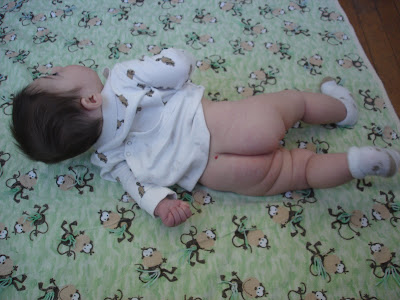 First Experiences: Jack was able to try lots of different foods this last month. Here is the order of different foods: Rice cereal, baby oatmeal, sweet potatoes, bananas, back to cereals, avocado, squash, and this week he will try peas. He did not do so well with the bananas. I don't think it was an allergic reaction, but his digestive system just might not be ready for it. Or maybe it was the little seeds inside? I'm not sure but after the second day he has a seedy stool and immediately developed a diaper rash. This rash would fade away and come back in a different spot until I finally decided to just go to the doctor today and it was diagnosed as I thought...a yeast infection! So he also got his first diaper rash too (if you don't count the rash from the jaundice at birth). I hope to try bananas again, but in a month because he really enjoyed the taste. 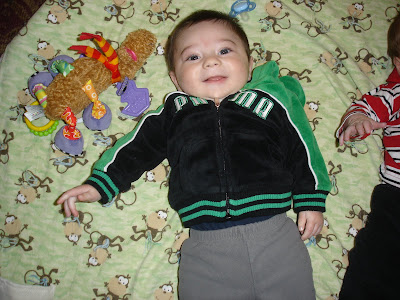 I think we are finally at a point where he will begin eating solids for breakfast and lunch. He is growing up so much! He also started eating four main feedings during the day at 7 oz. at each feeding. Sometimes he even tries to grab the bottle to put it in his mouth, but he doesn't really have the hang of that yet. Oh, and he has finally mastered how to roll. He can roll from back to belly or belly to back and he can go in both directions. In fact, sometimes he will get onto his belly and drag the blanket to get his toys or pacifier closer to his mouth. I figure it won't be long before he learns how to army crawl. Then I will really have to baby proof the house! Until then, I will just enjoy watching him play in one place.
- March 24, 2011

I love that you keep this blog. It will be fun to go back and read all of this later on. First sign of West Virginia hillbillyanese creeping in, "'ol blog of mine".