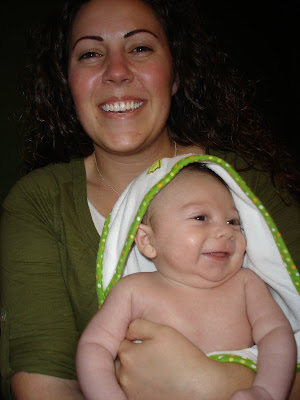 The second month has gone by quickly and fairly smoothly. We are beginning to see Jack's personality and it makes me very happy. I love being a mom and feel very blessed right now.

Temperament: He is a great baby. For the most part he only cries when he needs something: food, sleep, a diaper change. He has also started to talk to us with lots of coos, which has been really fun and he is a great smiler! 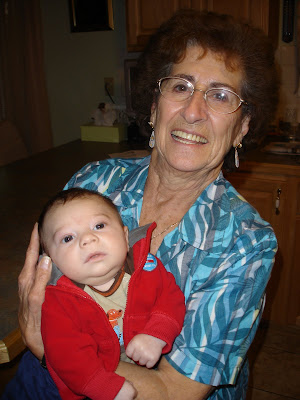 Items/Toys that We love the most: I decided to buy an activity center, which has been a favorite spot for Jack to play. He will lay there for up to a half an hour and just look up at the toys. I can tell when he is happy because he will coo at the toys, and when he is done it sounds like an angry coo! 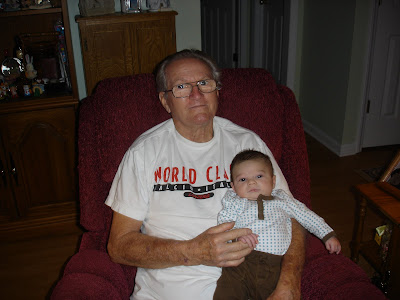 First Experiences: Jack started sleeping a little longer through the night. Now we will feed him around 8pm and then he does not wake up again until 2 am. After a quick feeding he is back to bed again. Unfortunately I cannot seem to kick him of the habit of waking up at 4am. He is not hungry, but just wants his pacifier or to get into our bed in the morning. Then he will sleep for at least another hour or two. I don't know how this habit got started, but it never fails to happen every day! He also started smiling. I was the first to see them, as he likes to do it when I am changing his diaper. It must be because he is looking right up at me and I noticed that he was studying my face. He gave his dad a smile on Joe's birthday, which of course made Joe very happy. Now we see smiles everyday whenever he is awake.
Jack also started to coo. I am trying to get him to make a high pitched coo, but I only hear those occasionally. I have a feeling he will be giggling by the three month mark. He has also experienced his first cold. Both Jack and I have gotten sick this week. It is just a little cold, but I was so worried about Jack sleeping through the night. We survived though! 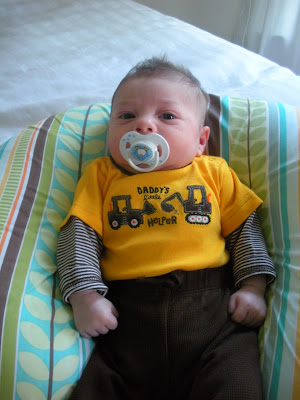 Oh, he also went climbing with mom and dad three times! Although I was constantly worried about Jack crying while we were climbing, but mostly he just loved being outdoors. He would lay down looking up at the trees and just quietly observe. He also took two road trips...once to his great grandparents house and then also up to Northern Virginia for Thanksgiving. 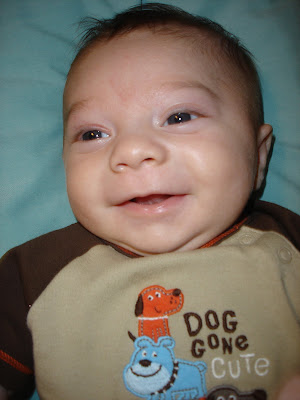 Honestly, we have the best little baby. I cannot complain. I am learning to be a good parent and just feel very blessed to have him in my life.