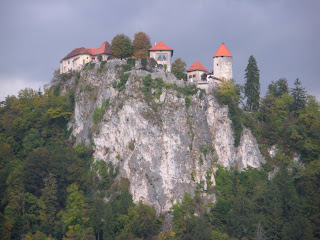 We just had a four day break from teaching. Today marks the end of Ramadan for Muslims so our school was off on Monday and Tuesday. This gave Joe and I the perfect excuse to take a trip. Although it was a bit expensive we decided this weekend could be like the designated honeymoon so we splurged a little bit. We went to Slovenia since we have heard of the beautiful terrain and alpine climbing. We didn't know how much climbing we would do, but we also expected to hike.

Our trip started on Friday afternoon as we left school early to head to the airport. It was a short flight, about an hour and a half trip. We picked up a rental car, looked at a map and headed to Bohinji. The roads were easy enough to understand until we got to the town and then we were in the dark trying to find our way to our apartment hotel for the long weekend. However, we did make it after turning around about four times and asking for directions. We checked in, and I think we lucked out because it was a recently renovated apartment style house and the owner already started a fire for us. At that point we 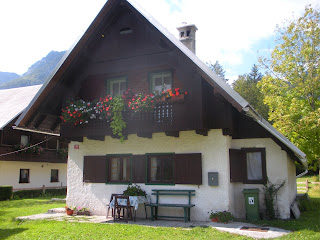 went back into the deserted town looking for a place to eat. We happened upon a hotel restaurant where we witnessed a family celebrating a wedding anniversary with a large man from the family playing the accordion and singing. Another man decided he needed to dance with every woman at the table. We even found ourselves clapping with each song, though we were tired and ready for the night to end.

Our second day was spent in Bled, Slovenia. We walked up to the castle on the hill, we went shopping, and we ate a very expensive meal. Our third day was spent hiking around Lake Bohinji, trying to climb on very cold rock, and then an attempted hike to a waterfall (we bailed when we reached the top and realized they were going to make us pay and we didn't think it was right to 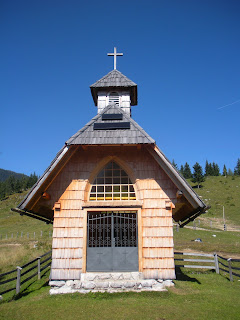 pay to see natural beauty). It was followed by a spontaneous trip to a Mexican restaurant. The beans and rice were so good! On the fourth day we planned to hike, but for various reasons we decided it would be more fun to drive around the small mountain roads until we got a flat tire and then we went for better roads. It was beautiful though and we wished we had a home up in the mountains. We made our own dinner at the apartment and relaxed for the evening as we watched the only English channel on tv (BBC news about Congress' failed attempt to pass the $700 billion dollar save for wall street). The last morning we rowed a boat to the only island on Lake Bled and then headed to the airport.

As usual we took several pictures. I will start by posting the following, but expect more to come. Plus, I need to post pictures of Macedonia, but all those pictures are on my husbands camera and also on his computer. We had two fun and adventurous weekends there...it will be a crazy story! 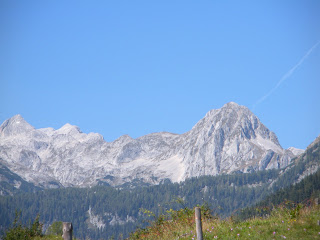 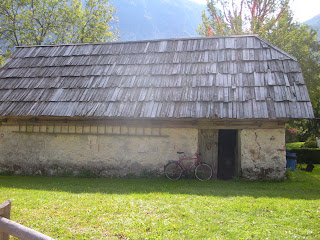 A quaint garage that we passed on our way to Savica waterfalls. 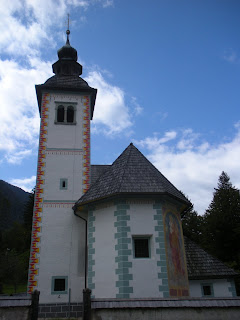 Most churches looked like this and there was one for every town. 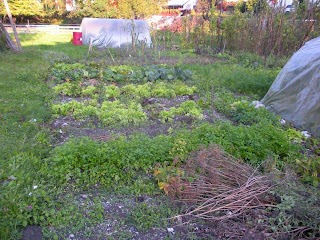 It seemed like everyone had a garden that was still producing fruit. In fact, at one spot I talked with the gardener and she gave me two strawberries from the garden. I was a little jealous of the good soil, climate, and location for farms. 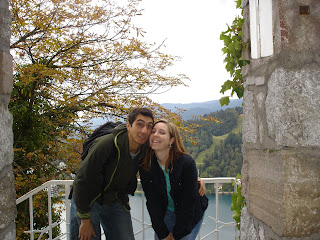 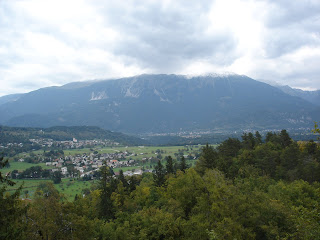 A view from the Lake Bled castle. 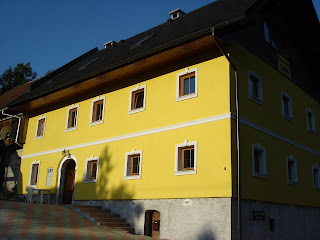 Wow, such pretty scenery! Thanks for sharing the adventure!

Gorgeous scenery! Every once in a while you need to indulge on a vacation. Good for you guys it looks amazing.