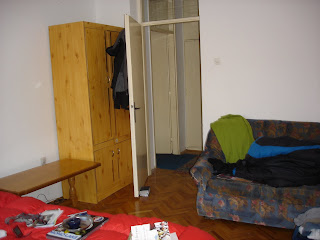 After we were dropped off at our apartment we spent the evening settling in. Of course we did not have anything, so we walked to the closest bank and took some euros out of the ATM and then headed to the closest market to buy shampoo, conditioner, soap, and two towels. We also bought a large jug of water and bananas. Thankfully the prices have been very cheap here. It only cost us 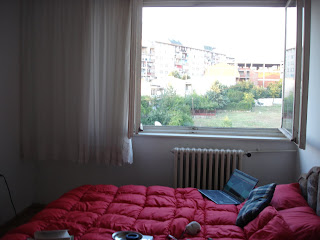 1.90 in euros for a huge jug of water and a bundle of five bananas.

Joe was complaining a lot about the apartment and I have to admit that at first I thought it was a bit crappy too. We both took showers and noticed that the water did not drain fast enough and was clogging a bit. The nice thing is that our landlord (whom is also a coworker) redid the whole bathroom and the kitchen sink and cabinets. So the whole bathroom has been re tiled, a new 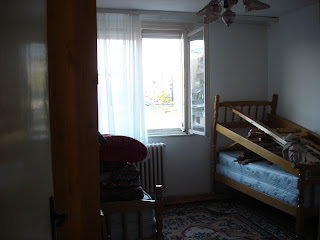 washing machine, new sink, toilet, and shower. It is an adjustment and we are getting used to the fact that we have to hold the shower handle to wash our hair. Actually, today we went to a large supermarket and bought some sticky clips, which were cheap and popped right off after two hours so I guess we will not be holding up the shower head that way. 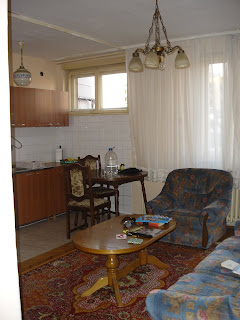 We also had to move all the furniture around. We are lucky to have a two bedroom apartment, but there was a lot of furniture (five beds). We began to move things around, and we actually broke two of the bed frames for twin beds (opps!). We honestly tried to unscrew them, but they broke on us and they were falling apart anyway. I bumped into one of the beds and the back part of the frame started to collapse. Our landlord does not seem to be mad, and I really hope not, then I would feel super bad that we could not have been more patient.

We moved the furniture around in the bedroom, so we could get the best use out of the space and we also moved the love seat in there because it was too crowded in the kitchen/living space. So that helped free up some of the space for us to move ourselves around. There really was not much in terms of pots and pans so we went out today and bought a few basic items to make this place feel like home. Our cart was full of pots, pans, dishes, silverware, a clothes drying rack, pillows, pillowcases and comfortable, and some more toiletries. Now it feels more like our home. We just need to put some pictures on the wall. 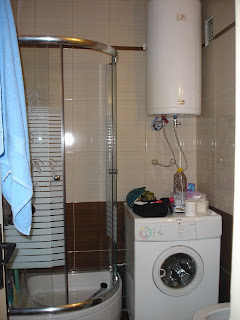 Tonight we made our first dinner using the stove. Peppers are a hot item in Kosova (if they had a national vegetable then this would be it). Everyone has been walking around with large bags full of just peppers. So we decided to follow suit and buy a large bag. I sautéed two peppers, sliced a tomato, toasted cheese on rye bread, and chopped a cucumber. A simple meal, but it tasted delicious. I have to say, the food here has been really great, especially the produce. And it is pretty cheap to eat out, only about six euros for the two of us. There are definitely adjustments, but I have enjoyed it all the same. Truly the hardest part of the whole experience is the power outages and water outages. It is fairly unpredictable, but the water goes out for about five hours each day from 12-5 and the electricity does what it wants! So it has been crazy...maybe it will grow on us.