This post is full of little bits and pieces of things I have been thinking about.  I hope you enjoy!


Ella has started on solid foods this week.  We tried bananas first.  I decided that she doesn't need to start with rice cereal, but we will probably incorporate that into one of the first foods this month.  She is still unsure of what to do, and gagged a little bit.  Today she did much better and I actually think she was excited to be sitting at the table with everyone else!


Jack has watched me breastfeed Ella a lot.  So I guess it was no surprise when I pulled out a baby doll that he would try to feed the baby.  I finally decided to capture it on video!  It is too cute and I'm sure it will be extremely embarrassing when he is a teenager! 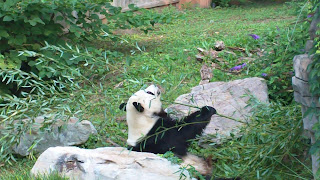 While we were visiting my family this past week, we made a trip to the zoo.  Last year my  mom bought us a yearly parking pass to the zoo, so I have tried to make it worth the cost by going every time I came up for a visit.  This time, we decided to make the trip in the morning.  I wanted to beat the heat of summer and also to make sure we were able to get a parking spot.  The night before I got everything ready that we would need, like snacks, clothes, and diapers.  We decided to wake up at 5:30 am and get the kids in the car while still dressed in their pajamas.  By 6:30 we were at the zoo, we fed and dressed the kiddos and were off to see some animals.  At this point there were very few people there.  Most were running through the zoo, but I read online that the mornings were the best time to see the wolves, horses, and pandas.  Exhibits and buildings did not open until ten, but I knew it would be cooler so more animals would be outside at this time.  We decided to stay until 9:30am, since it was starting to heat up and the kids were getting tired again for a morning nap.  However, we were able to have an unobstructed view of the pandas (I have never been to the zoo without the panda building being a mad house) and we saw the wolves (something I had never seen before).  So I think it was a great success and from now on, any summer trip to the zoo will start that early!  I know this might not be appealing for others, but since we are already early birds I was happy to bypass traffic and get there early. 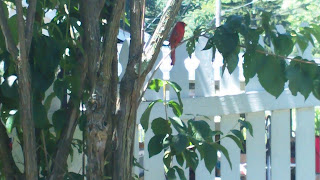 We have cardinals that are nesting in our front bush.  Actually this is their second nest.  I read online that they have two broods a year and the first brood was nesting in another front yard bush.  I love that I can watch Jack play with his toys and also listen to the baby birds as they chirp.  I took a picture of the daddy (he was watching me since I was right next to the bush with the nest). 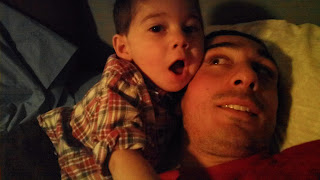 I found these pictures of Jack and Joe on my camera the other day...Joe is always taking random pictures and for whatever reason, this was my favorite of the bunch.  I think Jack decided to wake up his daddy! 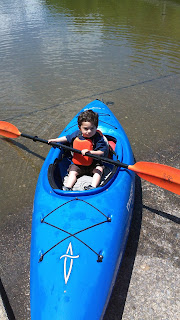 Recently we took Jack out in the kayak at Summersville lake.  He loves and boat quickly became a new word in his vocabulary.  He loves riding with daddy the best, but I look forward to a few early mornings with him on the water this year!  I have included a video of his very first trip with Joe and also a picture where we let him sit in the boat by himself.