Of course another month has gone by and I wonder if I have taken enough pictures of Jack. Some people are so good at documenting each month with a special onesie that says the week or month, but I'm just content to be like my mother and take pictures. I figure after the first year I'm going to put everything together in a scrapbook! We are just excited to celebrate his first Christmas and spend time with family members in New York.
Nicknames: Peanut, Little Man, Pumpkin

Temperament: He has always been an easy baby, but he continues to bring out his personality more each day. I have noticed that he doesn't really cry very much, he is more of a whiner. You know he is fed up when it really turns into a loud cry. He is also very vocal. Lots of coos and sounds. I think he has just discovered his voice so many times he will repeat noises or just get louder and louder. From an early age people always said that Jack was observant and he continues to take in his surroundings. He loves to look at the trees on hikes and not only does he smile at everyone, but he looks them straight in the eye. He has also fallen into a very nice routine with two morning naps and two afternoon naps. He is usually ready for bedtime around 7:30 and wakes up once at 12:30 for a meal. He is eating at five different times about 5.5 ounces each time. 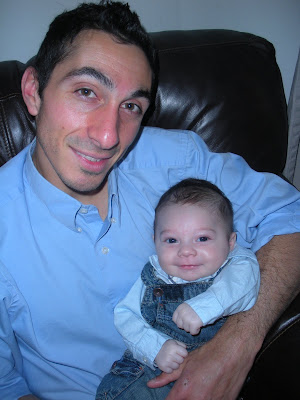 Items/Toys That We Love The Most: Well, I have fallen in love with his baby swing. It was a bit too fast when he was younger, but now that he weighs more I think it has slowed the rocking down a bit. Many morning and afternoon naps are taken in the swing, which allows me to get a lot done! I think Jack has found his hands to be the best toys right now. He can put them in his mouth for a longer period of time so I often see him sucking on his fingers. The hairdryer has also proved to be useful for tummy time. I will lay Jack on his stomach on the boppy pillow on the bed, then I dry my hair. It gives him at least ten minutes or so without any crying as he is fascinated by the hair dryer. I continue to love our Ergo baby carrier which allows us to take Jack on walks throughout this cold winter! 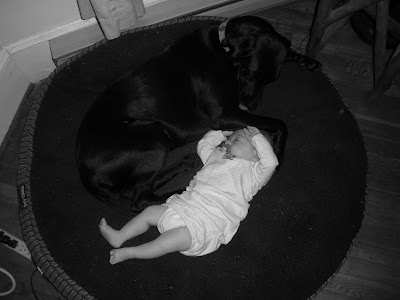 First Experiences: Jack is making different noises, you can see it if you watch the video attached to this post. He also started grabbing at toys, mostly just swatting at them, but occasionally he gets them in his hands and he will hold on for dear life. He also seems to really be able to identify me as his mom, because he will kick and wave his arms like crazy when I am around or during diaper changes. He started to giggle too. All though it is more of a laugh than a giggle. 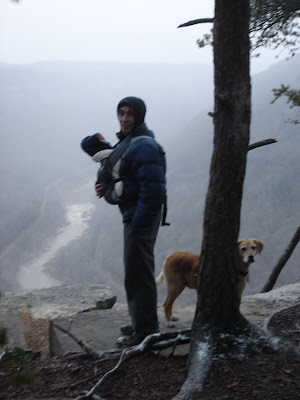 Jack has not rolled yet, but I figure it will happen soon. I had my first moment of thinking that I wished I could have some freedom. Eight hours of sleep would be really nice too. Becoming a stay at home mom has definitely been a big change, but I really love it. The moments of freedom and a need for a break do not last very long. I only need to see Jack smiling at me and I just melt. Plus, I have found that I can get much more down when I don't have to go to work everyday...the house is cleaner, dinners are better, and occasionally I even get to do some crafts!