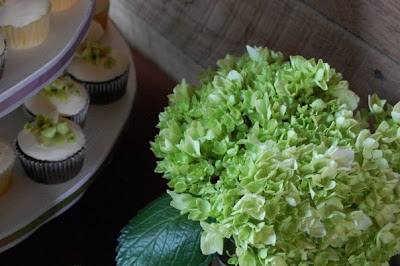 I am very proud of my wedding. As I look back on the day, I wish I had more time to help the caterer layout the food. I had a few different ideas about how it would have looked with my decorations. However, I let it roll off my shoulders on the day though, because seriously, it didn't matter. It just wasn't the exact finishing touch that I was thinking of. Many things turned out just as I wanted and imagined...if you see the pictures you will see what I mean. I thought I would give you an idea of how everything started. 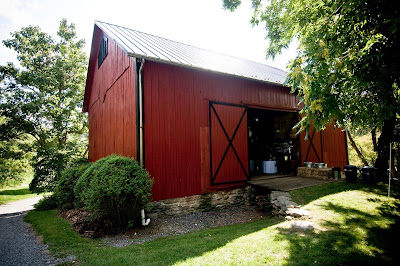 1. I happened to have a wonderful friend and former coworker that lives in Lovettsville, VA. He opened his home and barn to our wedding. It is a beautiful barn, and for years I had been telling him it would make the perfect place for a wedding. It took about two weekends of prep to clear out the working barn, clean it up, brush off the cobwebs, and Murphy oil on the floors. 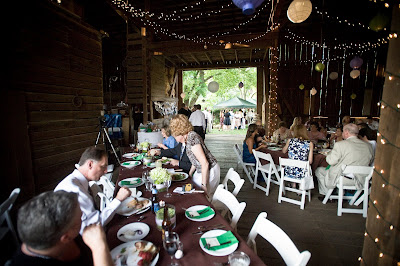 2. The next two pictures shows the finishing touches. We put up white Christmas lights and rice paper lanterns. Some of the lanterns had battery operated lights, since electricity was a bit of a concern. We rented the tables and chairs from a local company and the tablecloths came from a company I found online.

The glasses, plates, and silverware were borrowed from a good friend and former coworker (can you believe they had 80 place settings?). I bought simple green paper napkins, which I attached purple caribiners, which said Tracy heart Joe 8.16.08 (to have and to hold). 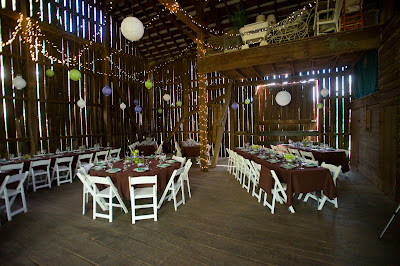 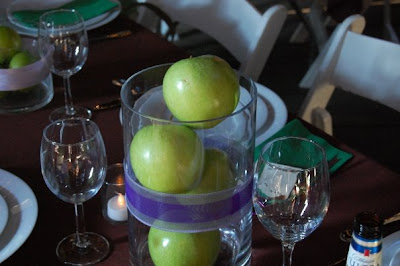 3. The centerpieces were very simple. I saw something similar in a bridal magazine, so I decided to steal the idea. Plus, it is a lot cheaper then flowers and we could feed the horses with the apples! I found cheap vases at Micheal's Arts and Crafts store in different sizes, also using a coupon. Then I hot glued different purple ribbons on them. On the morning of the wedding, I was up at 7am putting limes, green apples, pears, and split peas in the vases. I also purchased battery operated tea light candles, since we were in a barn. They worked perfectly. 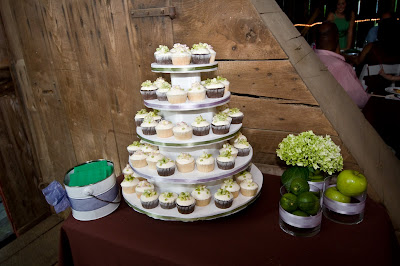 4. I borrowed the cup cake stand, all the small circular tables, and white table clothes from my caterer (for free). I did buy some flowers from a local florist (my bouquet, my sisters bouquet, a few corsages and boutonnieres, plus eight bundles of green hydrangea. I also hot glued the green ribbon to the cup cake stand. 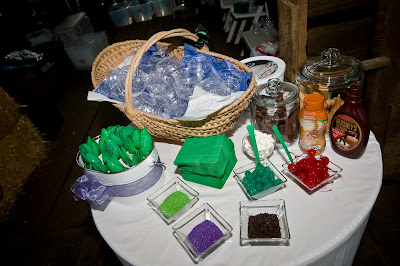 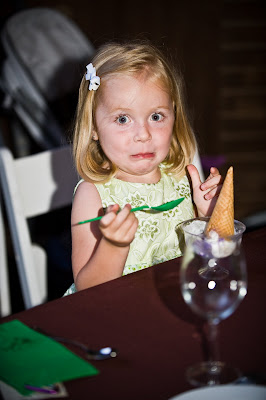 5. Joe and I love ice cream so I really wanted to have it at the wedding reception. I found large tubs of Briar's ice cream at Wegmans and we stored them in dry iced coolers. I found ice cream dishes online and I bought cheap green spoons. Then I picked out all the necessary toppings, trying to match our wedding colors (green, brown, and purple). Don't worry, I also had ice cream cones too. 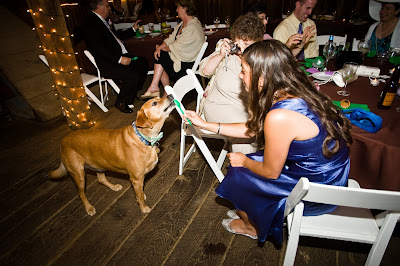 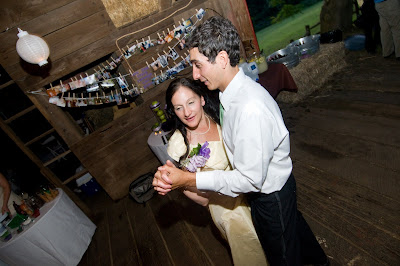 6. For drinks I had to provide those that drink alcohol (my husband and his family and friends) plus non-drinkers (my friends and some of my family). So we had lemonade in a cute glass jar, water in a cute glass jar, root beer and beer served in metal tins (do you see them in the far right corner of this picture? 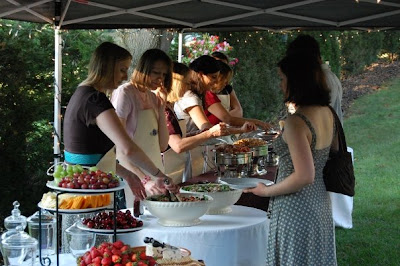 7. My original idea was to have food stations around the barn, but there was not enough room. So we basically had a buffet line. My friends from church came to help (aren't they the greatest?). We had fruit and cheese, two yummy salads, and chicken and pork wrapped in bacon, plus cookies! Another good friend, and former coworker made aprons for my helpers, it was a gift for them...aren't they cute? 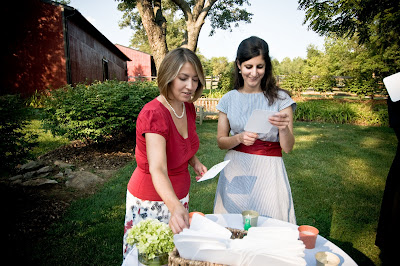 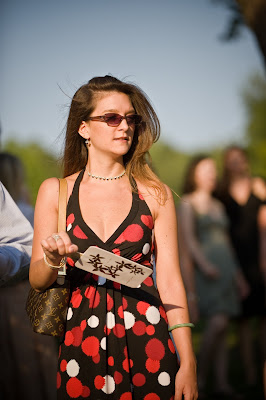 8. One idea I loved from a bridal magazine was personalized fans. I knew it would be hot, since it was August (somehow we lucked out with great weather though). So before people took their seat at the ceremony they were able to grab a fan and spritz themselves with bug spray.

Can you see the table with the personalized fans, bug spray, and citronella candles? The only sad thing was that I accidentally purchased the fans twice, which cost me an extra hundred dollars. If I had more time I think I could have made these, without having to order them. I would just need some card stock, special scissors, Popsicle sticks, and double sided 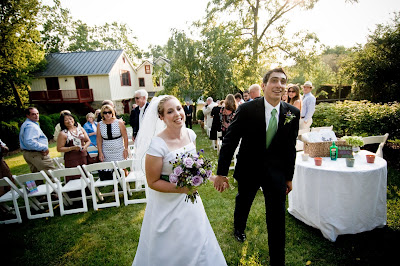 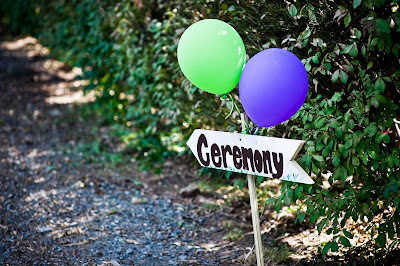 9. I was worried about people getting to the wedding site, so I made wood signs. I painted them white and then wrote our names or specific directions. My dad thought it needed a little more, because it turned out the signs were too small to read while driving. So although I found it cheesy at first, it was not too bad to have a few balloons with each sign. 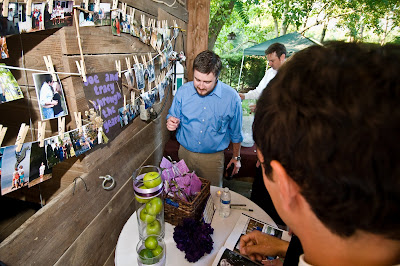 10. I was inspired by another wedding website http://www.thisyounghouse.com/wedding-album/ . They had a wedding in theirr backyard. In fact, I stole a few ideas from them. For example, the clothesline picture album. We found some cute pictures of us through the ages and hung them on the clothesline. The more pictures with friends, the better they were. The middle line contained pictures of the two of us together. I also made the sign that you see in the middle, I even attached dried flowers that Joe brought back to me from a summer trip to Yosemite.

We also bought glow sticks, where we attached return directions. This way people could find their cars in the open field and make it home.

Instead of a traditional guest book, I made one with shutterfly.com. I had a coupon to make a free calendar and book, so I used that and put the rest of our engagement pictures in the book. Then I asked people to attached advice and thoughts for our future. 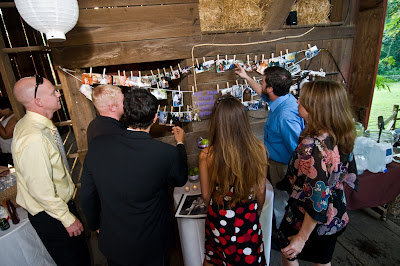 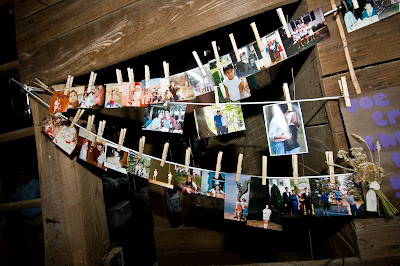 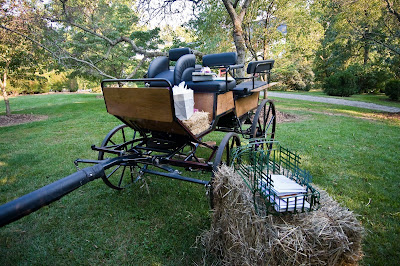 11. I added a few touches around the property, using items that were originally in the barn. This horse carriage, was pulled out and cleaned off. I figured people could put wedding gifts on it. I also found this cute green truck planter, which we used for holding cards. All the hay came from the barn too. 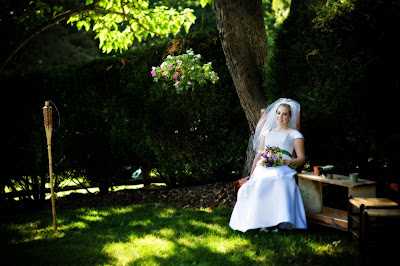 12. I knew there would be smokers from Joe's side of the family, so we set up a simple sitting area away from the barn. I used two old chairs and a bench that was found in the barn. A few candles and a tin bucket with sand solved that problem. I didn't know it would work so well for the photographer to take pictures there. 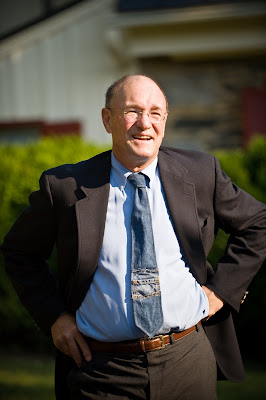 13. This is the owner of the house and barn...what a great man. I am so thankful for his kindness. As you can see, he decided to wear a very funky tie to our wedding...it was the one that I had made for him. The first tie I ever made.

First and foremost! I love the place! I just love that part of VA! My Mom worked at the elementary school out there for a year or so. Second, have you thought to do this for a profession? You sure do have a nack for it! I love how simple yet elegant it looks! And I bet your pictures are to die for!

Tracy! I love your blog. And I LOOOVE your wedding! Everything is so beautiful and VA and summery! I loved that farm ever since you invited me out to the barn dance party. And the house is incredible, too. Congratulations, you and Joe look so cute together. Glad you're back in the states -- I'm moving at the end of the month though! Good luck with jobs, etc.

Catherine- Thank you for the compliments...we really lucked out with the location. And I have thought about a career with this...but how do you even get started? I was thinking to contact a few local bridal consultants to see if I can help and learn...I do love it. Maybe i can network through church..."I can make it a elegant, but inexpensive wedding!"

Megan-I didn't know that you were reading my blog...so cool. I just spent some time looking at yours. I think you need to email me your phone number...let's get together before you move...where are you moving to? And what are you doing these days with work. I think your awesome!

Hey, i am glad you found me! It was fun to catch up on things iwth you! Congrats on your wedding, and everything was breathtaking! You did a wonderful job! It is just picture perfect.

It looks liek you had a beautiful wedding!

wish i could have been there! it looks absolutely lovely and elegant, yet rustic at the same time. i'm in agreement with the other comment here that you could do it as a profession. i can totally see you planning weddings. good luck with your job interview! glad you made it back to the USA safely.

I just randomly ran into your blog from your sisters and had to check to see if you had wedding pictures up since I heard you had a nice reception. Id have to say that you had the reception that I only dream of. The rustic yet chick reception. Love the pictures and a very late congratulations.