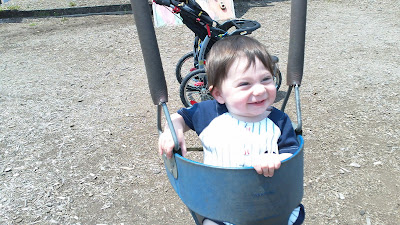 July has been very busy for us. I took a temporary job working at a local middle school for their summer enrichment program. I loved it and was glad to bring some money into the family. Joe was the stay at home dad for those few weeks too. I think he actually found it a little difficult. Not that Jack is difficult, but just having to work his schedule around the naps and feeding times really was an adjustment and he felt super lazy. By the third week we had figured out a system of letting Joe go for a morning run, which allowed him to feel more motivated. It was a quick month but as usual, but this past month did not disappoint. Jack is learning more and more everyday. 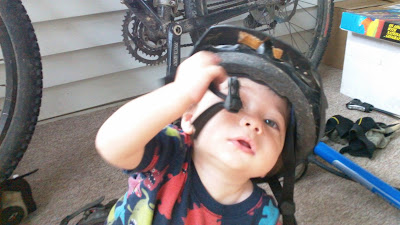 Temperament: There was a bit of teething at the beginning of the month, and he now has two teeth on the top. We also transitioned Jack into the crib, after about three months of sleeping in our bed. It took a few days of us taking turns (who would sleep in the room with him, on the guest bed), but he now does it. He still wakes up a little at night, but we have a system down where I can go in and give him a kiss and turn on the nighttime music and he will go back to sleep. That is a relief! He has also learned how to throw a mini temper tantrum. He will arch his back and fuss while flapping his arms. Plus, he has too much energy to just sit around. He wants to crawl everywhere and discover everything. He does a lot of clinging right now too. It seems like I'm writing all about his negative behavior, but the reality is that he is a super happy baby. He giggles all the time and finds plenty of ways to be entertained. He loves to be around people and when they talk to him he usually acts shy by putting his head on my shoulder, but will quickly go right into their arms. When he gets really excited he flaps his arms and justs seems to love life. 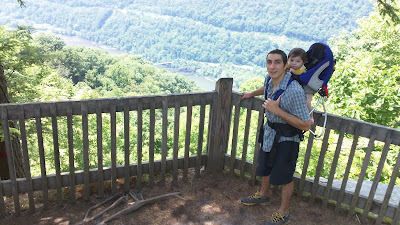 Solids He Has Tried: I missed his nine month appointment since I was working so I got to hear all about it from Joe. Apparently he didn't gain very much weight in the last three months, only about a half pound. So he weighs in around 19lbs. and the doctor encouraged trying to feed him more. I am hoping the limited weight gain is because he started to move around a lot, he went through a no solids phase, and we are in that transition into more food. So we have been trying out a lot of different things. Jack really just loves to feed himself, so I try to give him pieces of our meals as much as possible. He also loves Cheerios, but what kid doesn't? I just like that I can put him in the high chair and feed him Cheerios while I get other food ready. He has started to eat larger portions too (a whole jar at one sitting). But my favorite thing to feed him is also the most expensive thing at the grocery store. I buy these organic baby food packets in squeeze bags, which is perfect for on the go. Jack can just suck it out (which I am hoping will help him use a sippy cup too) and there is virtually no mess. He loves them too. 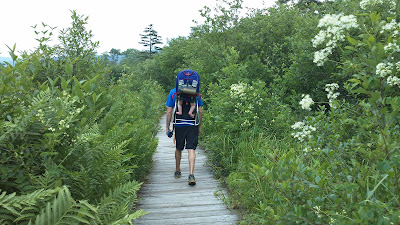 Items/Toys That We Love The Most: Jack really loves it when we pull out his wooden blocks and let him knock them over. Sometimes I don't even get very far in the tower building process before he is crawling over to knock them down. Actually he really doesn't need too many toys, he just wants your time. He loves to be chased or play hide and seek. I like to get on the floor and crawl around and have him chase me then I go after him and he just giggles like crazy. Jack has also learned to play the game of testing his limits. When we say no, he will keep trying until we are going after him. I have a feeling we will be going through that phase for a while. He also likes to drop things on the floor to see who will pick it up. He just wants the time to be with us, but will happily play by himself by pulling toys out of the toy baskets. 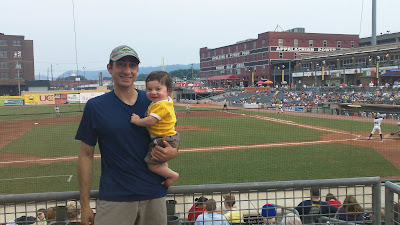 First Experiences: Although I have been working, he has still been able to do a lot of fun things. We have spent several days at the lake sometimes with his life jacket and sometimes without (he doesn't like the life jacket). We went to a baseball game in Charleston, but Jack could have cared less about the game. He was more interested in crawling all over the place. Needless to say, we only stayed for half the game, which was fine when our tickets only cost a dollar! Many days he was put in the baby backpack to go on hikes, climbing areas, or the lake. I'm happy to report that he loves to be in it and enjoys the outdoor experiences. In fact, when we are at the climbing areas, he often crawls all over the rocks...like father like son! We bought a baby pool for the backyard so he can be a happy water baby. I usually get in with him and blow bubbles. He also got to experience his first babysitters that weren't family, and that was a tough one for me. He is such a trooper though and did just fine. Jack discovered the stairs and I have included a video of him going to the top. Needless to say, we must keep the gate up or he would find his way onto the stairs. What else did he discover: toilet paper, feeding others, feeding the dog, and sliding off the couch! 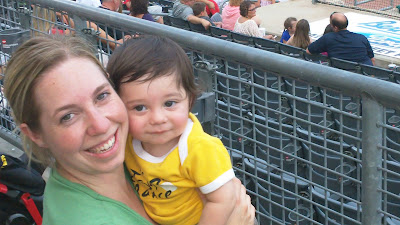 Every month he continues to be a joy and I look forward to seeing him interact with his younger sibling. I can't wait to see them play together. He probably has no idea what is going to happen and sometimes I worry about him not having enough time with us. He is still such a a growing baby and I can't believe in six more months we will be taking care of two babies! We must be nuts.