It is crazy for me to think that we are now closer to his 1st birthday party than when he was born! Time is flying and he is growing up so much. This last month has certainly been one full of new and different challenges. Or maybe I should say changes? 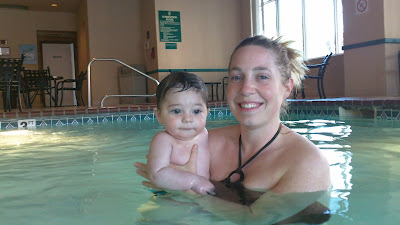 Temperament: Although I still find Jack to be an easy baby to take care of, he has become very demanding for my time. I am pretty sure he is teething or it is from a small cold, but he constantly wants to be held lately. And when you set him down to use the toilet or make dinner then he yells, not cries, just yells. I was definitely not expecting that, but I feel like we have a baby that expects attention all the time now. He has also decided that he does not like sleeping in his crib anymore. After listening to him cry in his crib for over an hour, I am just too tired to fight it anymore, so he ends up in bed with us. And he is like a koala bear, clinging with arms and legs wrapped around my arm. Get this though, if he sleeps with us in our bed he can go from 7pm until 7am, but that never happens when he is in his crib. He continues to charm others when we are out in public and I have been told a few times that I should submit a picture of him in a baby contest. Maybe I will try that this month? I was thinking of using the picture below, since I like it so much. 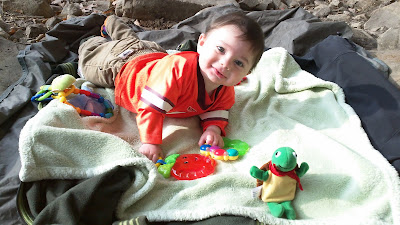 Weight: He is around 18 lbs. and continues to have a stocky Italian build. His eating habits have been changing. He was eating around 8 oz. in four bottles a day at the beginning of the month and now he is eating between 6-7 oz. four times a day, since he just doesn't want to finish the bottle.

Solids He has Eaten: Sweet Potatoes, Bananas (which has given him diaper rash twice so we are done with that for a while) Baby Oatmeal, Baby Rice, Applesauce, Peas, Carrots, Avocado, Squash, Peaches, and most recently he tried Green Beans. I can't wait to try yogurt next. Although, lately he has been eating a little less (maybe from the teething?).

Items/Toys That We Love The Most: I love using the bumbo seat, because it is convenient for baby feedings, but we are also using it in the bathtub when Jack has bath time. Ever since we went into a pool (a first this past month) he loves splashing water, so this works until he is sitting up on his own. We are also using the stroller a lot more as the weather gets warmer. Oh and since Jack is right on the cusp of crawling he loves wiggling around after an electronic toy ball that plays music and rolls around so he has to chase after it. 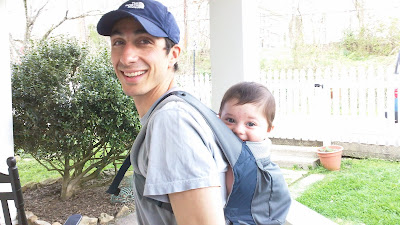 First Experiences: Let's see, he swam in a hotel swimming pool, which was super exciting for me. At first he was pretty scared, but after watching the other children playing and splashing in the water, he decided it was fun. He has gotten so good at rolling around, that he is now at a point where he does push-ups and has started getting up on his knees. I believe that crawling is right around the corner. He started eating two meals during the day, once at 9am and the other time at 5pm. He is making lots more noises, we even hear him say, "da da da da" and a gurgling noise that no one has been able to replicate yet. He got to touch the cat too, which of course made him super excited. We took a trip to the Red River Gorge, and took lots of pictures, but I'm saving that for another post. Oh, and he has graduated to sitting in the Ergo carrier on our backs! I love that the most.
- April 25, 2011