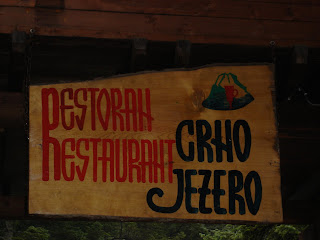 This past weekend Joe and I went to Montenegro. It was meant to be his birthday present to get him out of the city. We rented an overpriced rental car and did a lot of driving to find somewhere new to explore. It would have been more fun for him if I was willing to climb the largest peak even though it was covered in fog and probably snowing. I declined, so we just did easier hikes. He wished for more hiking time and less driving time. But what could I do?

The trip was still filled with some crazy experiences though. There was a lot of traffic 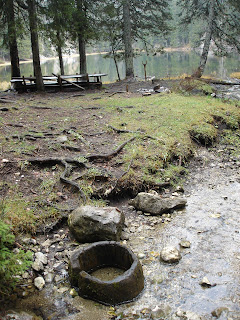 getting out of the city so it took us a while to really get on the road moving, but thankfully we found all the signs in Kosova to guide us to the border checkpoint. It is at the top of a mountain and we were warned about it being a bit of a dangerous mountain pass. So I begged Joe to drive really slow around all the corners...there were not that many markers to warn of switchbacks.

We survived and passed through both border checks without any problems and headed on our way into Montenegro without real clear directions to get around. We knew that we wanted to go to Durmitor National Park. We had both read about the beautiful Tara Canyon, which supposed to be the second largest canyon in the world, next to the Grand Canyon. I think that is in length, but I am not sure. And there were a lot of peaks and hiking trails. Getting there was a bit difficult and we found ourselves at one point pulling to the border check going into Serbia, which was definitely not where we wanted to go with Kosovo plates! So we had to tell the guard that we wanted to turn around and I asked Joe to find a hotel room for the night and we would find our way in the morning. Luckily we found a hotel pretty quickly with a price of 30 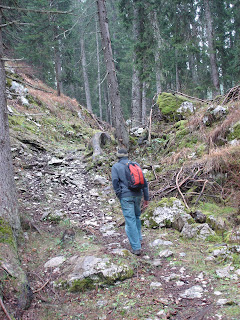 euros for the night with breakfast in the morning. It was decent for the price, but we found the breakfast to be disgusting. The waiter did not speak much English and since we understood omelet we thought that might be our safest bet. However, it came out burnt with sour cheese inside!

So instead we headed on our way and found the destination just fine. They are doing a lot of construction there, with many ski bungalows. I'm sure in about five years it is going to look like a great place, but it still looked a bit trashy with the construction. The town looked a bit dead too. I thought it might be quiet, because it was in the middle of the summer and winter season, but I didn't realize that the tourist center, hotels, and many of the restaurants would be shut down too. In fact, the only time we saw a lot of people in the town was when a butcher pulled up with a large truck. A crowd of men made their way over with wheel barrels and plastic coverings in the back of their cars. Then the butcher opened the back of the truck and we could see he was selling pig halves (cut straight down the middle from neck to tail). Surprisingly we found the main park and started hiking. It was nice for me, not too steep, but outside in the wilderness. It was cold too, so I was glad once we really started moving. 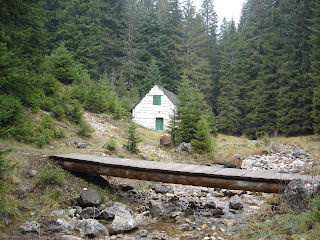 After hiking we ate dinner at one of the only open restaurants, but unfortunately all the good food choices were not available, since it was out of season. No porridge for me and no bean soup for Joe. Instead I ordered chicken fillets and he thought he ordered the best steak, the Durmitor steak, but instead he got a breaded chicken breast with cheese filling! And he still ate it. The waiter found us a room for the night in a families house, for eight euros each. Joe took a look at it and decided it was good enough and it would also be warm enough, so we decided to stay there. I think it was the teenage son's old room because we found a picture of a naked woman on the wall and about seven nudity magazines on the bookshelf! We both just laughed. The second day was filled with a lot of driving and sight seeing. Although it was a bit short, it was also fun to get away and see something new. 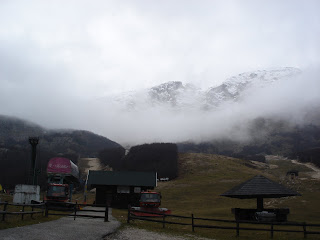 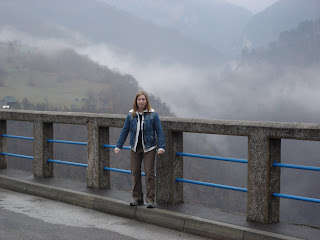 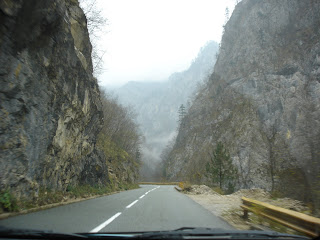 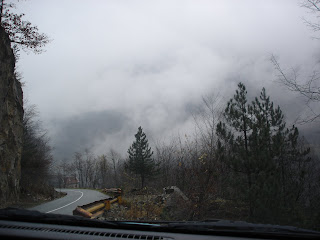 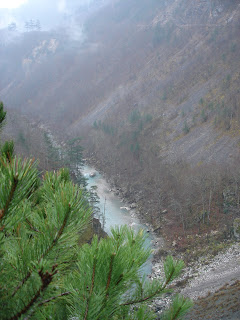 On our way into the national park we had to stop because of a felled tree. The strange thing was that we had just seen two cars pass us the opposite way so we knew the tree must have just fell down. To our surprise two old men were headed down the hill with a chainsaw and ax. Apparently they had chopped the tree down. What we want to know is why they were doing that right above a busy road? I guess we were lucky it did not fall on us! My good husband went out and helped them move the tree.

I love reading about all your exciting experiences. I would love to see all the places you see, but it also makes me so grateful for this fantastic country.

Amanda, you mean you get it from all the venting that I do that sometimes it is just best in the United States? haha. I miss home, but it is great to have this experience and get to be with my husband too!

I think you two are so lucky to be there. I know it's hard but I still really hope you go back after Christmas. I'm sure the break might be great for you and he can get out all his "mental releases" while he's here and prepare mentally for the return. I really hope you guys go back. It's hard but what an opportunity! Remember how excited you were to go out there the first time? Just keep that excitement and things will get better :)